A Call to Men and V-Day Launch Dismantle Patriarchy Contest, Calling On Students To Envision a Future Without Gender Violence 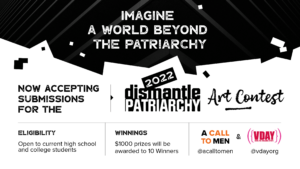 Patriarchy is a system of power whereby masculinity and men are marked as inherently more worthy than femininity and women. This puts men on top, giving them more access to power, resources, and even knowledge. It tells women that they deserve less: less money, less freedom, less strength. And it erases people who don’t ascribe to traditional gender roles, too often with violence. Through this contest, students will be encouraged to question, challenge, and break down patriarchy and show what a post-patriarchal world looks like.

Worldwide, youth are calling for a change in the systems that continue to fail us. We have seen the resurgence of white supremacy, the devastating effects of climate catastrophe, and ongoing economic inequality. The Covid-19 pandemic has exacerbated the effects of these crises and continues to be felt by the most marginalized communities today. One of those systems is patriarchy, which creates a culture of domination, violence and suppression. Patriarchy is still the dominant way our culture is organized– it’s time we dismantle the injustice at the heart of the system.

The Dismantle Patriarchy contest consists of two categories of competition: high school and college. Ten winners from each category will receive $1,000 prizes. All final submissions are due April 15th, 2022, and an awards ceremony for the winners will be held in late April 2022.

Questions that entrants should consider for their submissions include:

How would you Dismantle Patriarchy?

For additional information on the Dismantle Patriarchy Contest, see below and also visit https://dismantlepatriarchy.org/.

In 2018, V (formerly Eve Ensler) and A Call to Men’s CEO Tony Porter organized a meeting in New York City, gathering twenty anti-violence activists from across the United States. In response to the #MeToo movement and wave of victims and survivors stepping forward, the group was diverse in race, ethnicity, sexual identity, class, age, and geographical location. Their collective discussed an intersectional vision for a collaborative project that would help shift culture and directly impact how we engage and interact with one another. The group unanimously agreed that some of the best solutions to combat gender-based violence rested with young people. The Dismantle Patriarchy contest was born as a result.

The Dismantle Patriarchy contest will be judged by two teams of judges. The high School submissions will be reviewed by Youth ACT!, a group of young leaders “Actively Committed To” promoting healthy masculinity and healthy relationships, preventing gender-based violence, and creating a better world for ALL women, girls, men, boys, LGBQ+ Transgender and nonbinary people. Youth ACT! is mentored by A Call to Men.  A separate panel of judges will review the college submissions.