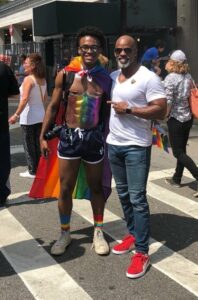 Our son Jalen came out as gay when he was 15 years old. His mom and I were not surprised. We had expected this to be true from a very young age. By the time he told us, we were waiting with open arms. Our entire family celebrates who he is, just as we celebrate the uniqueness, authenticity and beauty of each member of our family.

When Jalen first confirmed his truth, I was – and remain – fearful for his safety. At the time, I was not worried about how his gender showed up or didn’t, how he expressed himself sexually or who he loved. No, I feared for his life.

Research shows that sexual orientation consistently ranks as the third-highest motivator for hate crime incidents. Attacks motivated by race are most common.

Jalen is a young, Black male, now living openly and outwardly gay. The discrimination, hatred, racism, homophobia, heterosexism and countless other dangers that await at these intersections make me want to never leave his side.

I was prepared for our son’s announcement and truthfully, I was waiting with excitement for him to embrace and share his full and authentic self with us. However, I was not fully prepared for all the ways my own heterosexist conditioning would emerge.

I consider myself pretty woke and I welcomed all the major milestones – the coming out to family and friends, meeting the first boyfriend, and conversations about sex, self-care, and responsibility. But I caught myself struggling with the smaller things. I regularly took my children for manicures and pedicures and one day at the salon, Jalen asked to have his nails painted. On the outside, I encouraged his expression, but on the inside, I was hoping he would choose darker colors – black, navy, brown. My reaction wasn’t about him – it was about me! I didn’t share this with him at the time, but my distaste for the colored nails was surfacing because of my fear that he would be bullied or teased, and my heterosexism. Brightly colored nails are not what “men” do, and Jalen’s expression of his gender was making me uneasy.

Jalen had always looked like the stereotypical high school athlete and was read as straight by others, so I never had to fear the hatred and discrimination until Jalen chose to present differently. The colored nails were a change for me. And my reaction was a wake-up call.

My socialization – the ways the world has taught me to be a man – remains deeply rooted. It is critical that I acknowledge this, even after spending my life working to promote healthy manhood and male authenticity. I am not immune – no man is.

Fortunately, I was able to work through my issues and support Jalen in the evolution of his nail colors and later, even share in his excitement when he discovered a makeup palette. Last year, Jalen asked to go to his first Pride Parade. I informed him that he could go, as long as I could go with him because, “after all son, I’m proud too!”

We traveled to Pride by public transportation with a number of his friends. He wore a long rainbow cape – as any superhero would – a pair of shorts, rainbow socks, white sneakers, and had his stomach painted with rainbow glitter.

As you can imagine, we got quite a bit of attention. While we were traveling, a man approached me and shared a sentiment that many other men, women and non-binary individuals have also shared. He said, “It’s wonderful that you support your son.” I didn’t reply with the polite “thank you” that he likely expected. I simply asked, “What is there not to support?”

Jalen is 17 years old now, and his experience has added another complex layer to my understanding of what we at A Call To Men call the collective socialization of manhood. Men and boys are taught to not show fear or weakness, not ask for help, not to cry or express emotion other than anger, to exhibit qualities associated with power, dominance and control, to be tough, to man up, and to believe that men and boys have more value than women and girls. We coined a term called the Man Box to illustrate these teachings. In the Man Box, women and girls are property, sexual objects, and have less value. Heterosexuality is the norm, and people who identify as LGBQ, trans and gender non-conforming are inferior.

At A Call To Men, we teach that heterosexism is the glue that holds the Man Box together. When men or boys do things that are outside of the traditional, hyper-masculine notions of manhood, they are punished, ridiculed and bullied. When men and boys step outside the Man Box, there is a dominant majority quick to tell them they are falling short, they are not man enough, they are acting like a girl or a gay man.

Recent research found that boys still feel the Man Box dictates how they should think, act and feel. Asked “what society expects boys to do when they feel angry, they said they were supposed to be aggressive or be quiet and suck it up. When they felt sad or scared, they felt pressure to hide those feelings.” This is a trap. The Man Box polices men, demanding adherence to its teachings, and condemning anyone who falls short. The teachings of the Man Box not only lay the foundation for violence and discrimination against women and girls to persist, but it shortens men’s life spans and increases men’s suicide rate. The American Psychological Association recently released first-ever guidelines for addressing toxic masculinity. The guidelines were based on more than 40 years of research showing that traditional masculinity is psychologically harmful and that socializing boys to suppress their emotions causes damage that echoes both inwardly and outwardly.

Nothing and no one have taught me more about how to be my authentic self than watching my son love and claim himself.

My journey as the father to six unique, beautiful and very different children continues to evolve. Like all parents, I have certainly made mistakes and of course, I would do some things differently if I had the opportunity. But one thing I know for sure is that I try to be a great dad – and for me, that means thinking critically about why things like the colored nail polish come up for me, seeking to value authenticity in myself and those around me, and understanding that my children, like yours, are unique, perfect and have much to teach us.

If you are a father or a father figure in a young man’s life, I encourage you to consider how your collective socialization – your Man Box – might be impacting that relationship. Manhood and fatherhood are both wonderful and challenging. With the best of intentions, we can still miss the mark as a man or a father. I continue to examine my own thoughts and behaviors. I would ask all fathers and male role models to consider the ways the Man Box has shaped your thoughts about manhood, women, girls and LGBQ, trans or gender non-conforming people. Were you teased as a young boy for “throwing like a girl” (by the way, girls throw just fine!) or “crying like a b****” or dressing a certain way? Did you react to that criticism by trying to overcompensate or act more traditionally masculine? How did your relationship with your own father impact the kind of father you want to be?

I still have so much to learn as a father – and especially as Jalen’s dad – but I believe what matters most to our children is knowing the security and love he/she/they have always received is still intact and always will be.