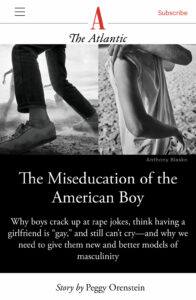 Peggy Orenstein’s The Miseducation of the American Boy is a painful, yet brilliant account of the effects of the Man Box come to life. And it exactly mirrors our experience working with hundreds of thousands of men and
boys over the past two decades.

The focus of Orenstein’s story is 18-year-old Cole, a self-described “typical tall white athlete” who hung with the “jock group.”  Cole, one of more than 100 young men interviewed, shared his experience of trying to break out of the Man Box, trying to confront rape culture, trying to speak out against sexism, and the overwhelming, relentless, and consequential pressure he felt to fall back in line and meet the expectations of an imposed manhood.  From dealing with his parents’ divorce to contemplating going vegan, Cole articulated how he felt a constant disconnect between his personal values and the culture in which he was expected to fit in.  Around his father, he felt he had to remain emotionless.  Around his teammates, the suggestion of a vegan diet was met with gender-based insults.  Cole said he felt he would need to be Superman to call out all the sexism he witnessed and be heard and not ostracized.

This is the plight of many young men today.  Young men who see how culture is trying to box them in but want to do things differently.  They see that there’s room for equality without anyone having to lose anything. They see that there’s no one way to be a boy and they are bravely charting their own course.  Not always without consequence — but with conviction.

Healthy manhood relieves men and boys of a lifetime of trying to measure up, of trying to be man enough, of endless performance, and constant suppression of emotion — all at the expense of women, girls, LGBQ, trans, and gender non-conforming people — as well as themselves.

We know the way forward is healthy manhood.