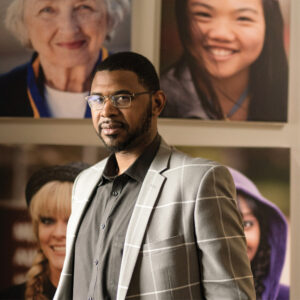 I grew up in Kenner, Louisiana during a time when New Orleans was the murder capital of the world. Survival was the name of the game that every boy had to master when walking out of the house. Everyone in the neighborhood and community took on the responsibility of making me their definition of a man. For some that meant teaching me to defend myself from bullies. For others it was their responsibility to solidify my interest in girls. Simultaneously, my family stressed the importance of faith and education.

As you can imagine, the messages were confusing, conflicting, limited, yet also powerful. Powerful because I learned how to be everything to everyone else while not knowing my own identify. School and community were the training ground for mental toughness, perseverance, toughness and promiscuity. Things considered essential to manhood. Family and church were training for faith, spirituality, love, care, forgiveness and charity. All things traditionally deemed feminine. An internal conflict, to say the least.

The combination made me a professional and hall of fame collegiate athlete with a great reputation. It also led to an early divorce, depression and isolation. From the outside looking in I had it all and yes, I was very fortunate. I was also completely lost.

Two things helped me find myself: going deeper in my faith and authenticity. I was confident in how to reconnect spiritually but being authentic was hard. It went against everything I was taught as a child and what was reinforced as an adult. I wondered would people treat me differently if they knew my flaws, failures and pain. After all, I had never been authentic before. I always wore the correct mask for the situation.

While traveling to play basketball, I found a lot of men who had been trapped by societal expectations. I found men who were struggling with their identity without the space to figure it out. And I saw men who abused those who loved them. Lashing out, not knowing how to express themselves in ways that were not harmful to themselves or others. The most shocking part was that they were all men who, like me, wore a mask.

This mask was one we all chose to wear daily, never asking for help or acknowledging something was wrong. Specifically, I thought I had manhood all figured out. However, to think that I would get manhood correct without guidance was ill-advised and arrogant. It was also very costly. I found myself divorced, broke and depressed even after accomplishing my dream of being drafted in the NBA. Something had to change.

You only live once right? Then why not be authentic. For me, living authentically has helped my relationships.  I am transparent, vulnerable, caring and nurturing. As a man now celebrating four wonderful years of marriage, I can tell you, it’s worth the change!

That being said, it’s not always easy. Disagreements are a part of relationships and communication. Disagreements are hard, especially when you’ve been conditioned not to express yourself, apologize or self reflect. I’ve learned that counseling is not a bad word. It’s given me the tools to articulate my concerns with grace, while still getting my point across. Counseling also taught me how to listen to understand, not respond. Years ago, I would have never agreed to counseling and would never suggest it. I learned that clinging to my definition of manhood would lead me to a life alone or worse, acting in a way that is harmful to others.

It’s taken time to mature and change my thinking, but this is my journey toward healthy manhood. It’s not a place that can be reached, but a journey where progress happens daily. I’m not yet the man I hope to be, but I’m certainly not the man I used to be. Today I’m happy to just be me, authentically!

Shan Foster, A Call To Men Trainer and VP of External Affairs & AMEND Together, YWCA of Nashville & Middle Tennessee