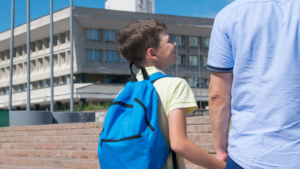 Growing up, one of the things I wanted more than anything in world was to have my dad take me to school and tell me he loved me as I got out of the car to start my day. Growing up in Bryan, TX, my dad demonstrated all the stereotypes of the Man Box: show no emotions, be strong, don’t ask for help, and play sports (which, in Texas, meant “play football”). As a young boy, I was always considered the tough one in my family and was encouraged to be strong and suck it up whenever things didn’t go my way. Sports became an outlet for me to show emotion, and only in the context of sport was I able to show my emotions…as long as I performed at a high level. I always wondered why this was acceptable.

It was not until recently that I realized my love and passion for sports was developed because of the lack of interaction and emotional connection I had with my dad outside of sports. Throughout the majority of my adolescent years, I played sports so that I could have a conversation with my dad and gain his approval of me being man enough to be his son. Even though I was blessed to reach the pinnacle of football and play in the NFL, I would say it came at the expense of having a genuine, loving relationship with my dad.

Society and cultural norms also played a huge role in the development of my relationship with my dad because the world around me told me dads are supposed to be the financial support – strong unemotional human beings and conquerors of women. All of these are qualities dictated by the Man Box. These teachings lead to the lack of conversations between children and dads during that ride to school in the mornings or from school in the afternoons.

Currently, I take my two children to school every morning and I make sure to tell them I love them before they get out of the car to start their school day. One day while making the drive to school, I noticed something that was very unexpected. I noticed that there were many other dads dropping their children off and giving them hugs and kisses as they went off to school for the day. My first thought was, “WOW, I’m a long way from the hood now!” But then I thought, “WOW, this is how it’s supposed to be, men showing their children love and affection on a daily basis and taking some of that emotional weight off the shoulders of moms.”

Living in a time where fathers take their children to school is a sign of progress. Men are breaking out of the Man Box. I celebrate that progress, but I also know that there is still so much work to be done to eradicate the issue of violence against women. I truly believe it starts with the love we show and demonstrate on a daily basis to the children in our lives.

I love my dad and would never blame him for the lack of relationship we had because he was only reflecting and doing what he was taught and what he thought was right. As a trainer for A Call To Men, I encourage men – myself included – to look deeply at the relationships we’ve developed with the men and boys in our lives. Ask yourself the question, “where do we go from here?”

We are talking about healthy manhood and what it means to be a man more than we’ve ever done before. Let’s take it a step farther and continue this conversation for the sake of the women in our lives. We have to be ready to think outside the Man Box and challenge each other to show love – not hate – toward everyone, but especially the children.